Late night arrival at Delhi from abroad, our representative will meet you and facilitate you to check in at the Hotel. Overnight at the Hotel. 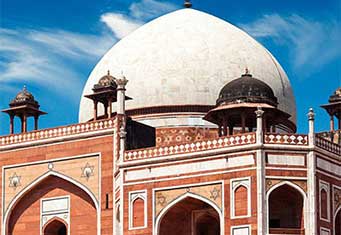 After breakfast at the hotel, do sightseeing in the city, covering Old and New Delhi. Visit the biggest mosque in India the Jama Masjid, constructed by Shah Jahan in 1658. Take a Rickshaw ride through the narrow gullies of Chandni Chowk.

Post lunch visit “New Delhi” which came into existence much later, and is also known as Lutyens Delhi, taking after the name of a British architect who was largely responsible in designing the India Gate, Presidential House, Secretariat, Parliament House and many other buildings in that area.
Drive on to see the tallest tower in Delhi, known as Qutub Minar, which declared the arrival and rise of Islam in India, and the latest jewel Lotus Temple.

This morning at about 8.00 A.M leave for Agra via the New Yamuna Expressway (3 hrs drive). Reach Agra and check in at the Hotel. Proceed to visit the famous monument of love- the Taj Mahal. It has been describe d as the most extravagant monument ever built for love. The Taj Mahal is not open to visitors on Fridays.
After lunch visit the Agra Fort which lies on the bend of the river Yamuna, almost in the heart of town. It was built by Emperor Akbar as his citadel over the years 1563-73 in the finest architectural style. It has imposing gates and walls of red sandstone and a moat. Evening at leisure and overnight stay.

Do the early morning safari at 6.30 A.M at the Ranthambhore National Park with a guide, in a canter (open air bus).
Ranthambhore National Park was declared a Wildlife Sanctuary in 1957 and in 1974 it gained the protection of “Project Tiger”. It got its status of a National Park in 1981. It is one of the finest places to view animals as they are used to being stared at here. The tigers here are so used to the human presence that they hunt in full view of the visitors and are even visible during the day, as they have no fear of the human presence in vehicles.
Return to the hotel for a late breakfast and some free time till lunch.
Post lunch visit the Fort. A huge fort after which the park has been named towers over the hill. There are many ruins of bygone eras scattered all over the jungle, which gives it a unique, wonderful and mixed flavour of nature, history and wildlife.
Overnight stay at Ranthambhore.

After breakfast drive on to Jaipur (3 hrs by road) and check into the hotel.
Proceed to visit the famous Amber Fort and Palace which is a striking example of Rajput architecture situated on a hill side and overlooking a lake, reflecting the fort’s ramparts and terraces. Enjoy an elephant ride where you will be taken royally to the gates of the Fort, seated on an elephant.
Afternoon visit the City Palace in the heart of the old city which is the former royal residence that houses a museum with a superb collection of Rajasthani costumes and an armoury of the Mughals and the Rajputs. Also visit Jantar Mantar, an observatory near the museum.
Evening at leisure & overnight stay.

Day 7: Jaipur sightseeing & then to Jodhpur

Morning visit the landmark of the “Pink City” the Hawa Mahal or the palace of winds, built to enable the ladies of the royal household to watch the processions passing in the street without being seen.
Visit Lakshmi Narayan Temple built in Marble on Moti Doongri hilltop.
Also visit Albert Hall Museum containing a rare collection of decorative art objects, paintings, sculptures and the well known Persian Golden Carpet.

Evening board a train from Jaipur to Jodhpur, the train leaves Jaipur at 5.00 P.M to reach Jodhpur at 10.20 P.M
Arrive at Jodhpur where our representative will help you to check in at the hotel. Overnight stay.

This morning visit Meherangarh Fort, one of the most impressive & formidable in the whole of fort-studded Rajasthan is situated on a high natural rock bluff and from which you can look down on the wonderful panorama of the bustling city below. Also visit Jaswant Thada- an imposing white marble cenotaph built to commemorate the acts of bravery and generosity of the rulers in the 19th century.

Later drive on from Jodhpur to Jaisalmer( 4 Hrs), reach and check in at the hotel and overnight stay.

This morning visit the Palaces, Jain Temples and magnificent havelis, richly decorated and carved from golden yellow sandstone. Patwon- ki- haveli (house of the brocade merchants) is the largest and most elaborate havelis of Jaisalmer.
Jaisalmer is India’s most exotic and unusual town situated inside a huge mud fort. It is a tiny jewel in the heart of the Thar Desert which was the capital of the Bhatti Rajputs. Evening drive on to the Sam dunes where you will witness sunset while enjoying the camel ride. Return to your hotel after dinner.

This morning visit the Gadisar Lake, the large natural oasis that attracted Rawal Jaisal to this site.
Also visit the Royal Cenotaphs of the Rawals in Barra Bagh where the rural were cremated. Early evening drive back to Jodhpur, overnight at a hotel in Jodhpur.

Places of interest in Udaipur:
Sajjan Garh: The monsoon palace offers a panoramic overview of the city's lakes, palaces and the surrounding countryside.
Gulab Bagh: A spectacular rose Garden laid out by maharana Sanjjan Singh.
Saheliyon - Ki Bari A Garden for the maids of honour with numerous fountains brings the unique life style of the royal ladies who once strolled here.
Jagdish Temple built in 1651 by Maharaja Jagatji Singh I, this Indo-Aryan temple is the largest and the most beautiful temple of Udaipur with noteworthy sculpted images.
Ahar: The ancient capital of sisodias, 3 Km from Udaipur, is a profusion of royal cenotaphs of the rulers of Mewar.
City Palace: A majestic architectural marvel towering over the lake on hills surrounded by walls is completely white and is approached through Tripoli gate, built in 1725 AD. The palace has several carved balconies, arches and decorated pillars.

Pick up from your hotel and drop at the Udaipur airport for your flight to Delhi/ Mumbai.

End of Tour and our Services

The Company will not be responsible for any delay or cancellation of trains/ flights or Closure of any of the monuments in the itinerary due to reasons beyond our control.